Choose Your Story: A Game Genre Loved By Young Women

What is Episode? Launched in 2014, the Episode app is a free-to-play mobile storytelling network and platform. It features interactive stories built from the ground up for mobile and has even partnered with celebs likes Demi Lovato. In Episode, the “choose your own story” format falls under the interactive game genre known as the “visual novel.” These types of games have a text-based narrative with animated stills. Think Choose-Your-Own-Adventure books but more visual with talk bubbles popping up for dialogue, along with choices that determine the path of your story.

Developed by Pocket Games, Episode has the world’s largest community of interactive stories and storytellers with over 12 million registered creators and 100,000 stories. Unlike the rest of game development, many of them are young women.

The content on Episode is primarily geared toward women, with stories inspired by everything from Mean Girls to Jane Austen. According to Polygon, several storylines are romance novels that were tweaked and uploaded into the app. Visual novel platforms, including Tumblr and the app Choices, unapologetically cater to their female fan baseunapologetically cater to their female fan base and garner a passionate community in return.

The game also offers more diversity than mainstream videogames. In addition to character customization, players can typically choose from three romance options: attracted to men, women, or both. 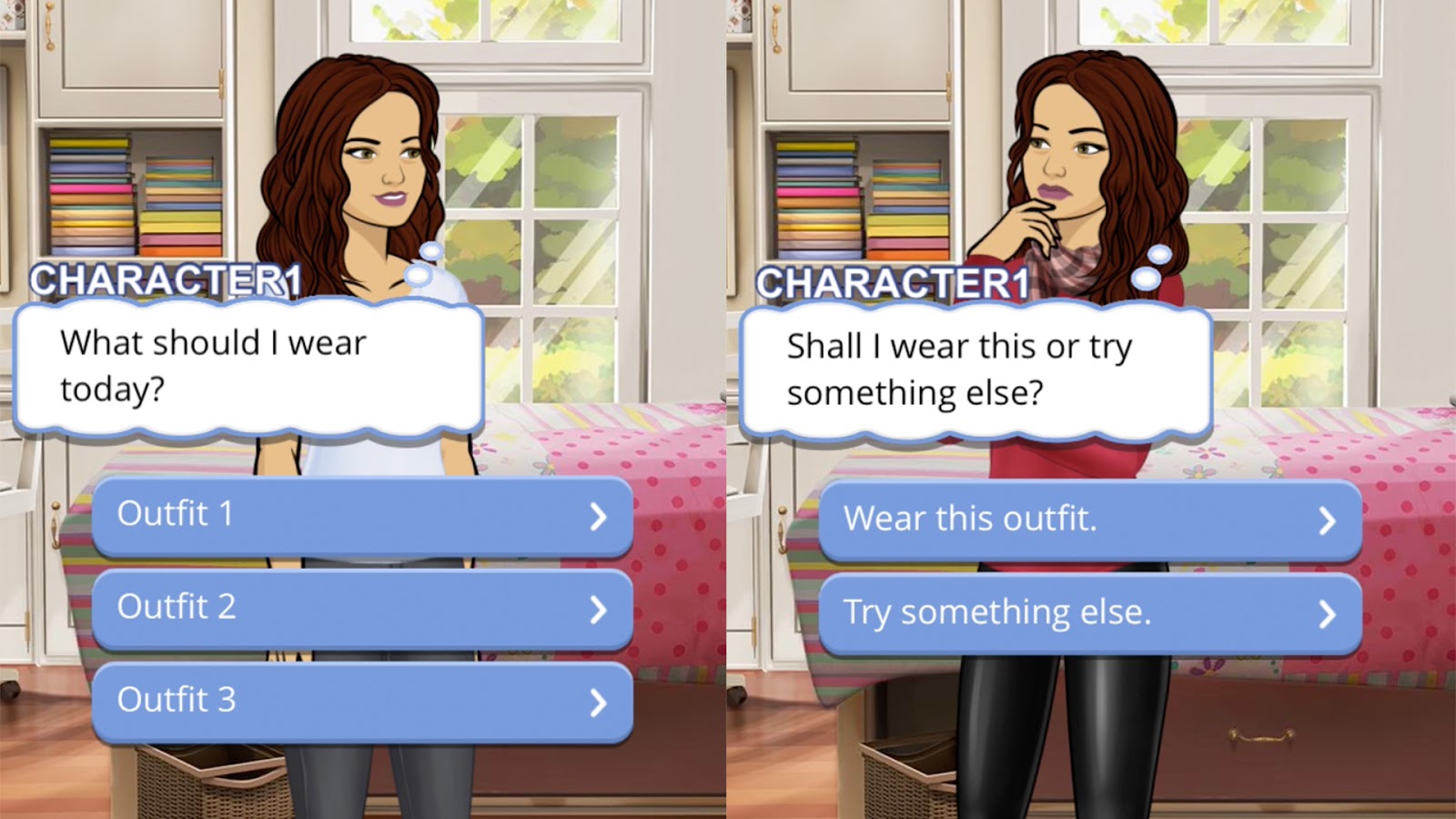 Going from user to creator. The reason the app is so popular likely has to do with how it frames itself. A call-to-action from the website reads: Interested in creating a story? There’s no mention of “creating a videogame,” “game development,” or even “visual novel.” Episode’s users don’t necessarily play games or consider themselves gamers, so creating one through this app isn’t too intimidating.

The creators that I spoke to began as users themselves then were drawn in to try their hand at it as well.  Two years ago, Eleanor, a popular UK-based Episode creator, found the app and used it to stay awake during a long hospital visit for her son’s ear infection. After a while, she realized that there were user stories in addition to stories created by Pocket Gems, which ultimately led her down a path to become a creator herself.

“Episode is so user-friendly, so I essentially taught myself how to code. And the more time I spent coding, the more I experimented with different kinds of things I could and couldn’t do in the app—avatar automations, backgrounds, and special effects,” said Eleanor. “It’s been a really eye-opening experience.”

At first, Eleanor thought of Episode creation as a relaxing hobby, but after winning an official Dirty Dancing rewrite contest for her story Austentatious, she began to see the potential in the platform. As her readership grew, Eleanor was able to leave her full-time teaching job to focus solely on Episode creation.

Similar to the YouTube model, featured stories on the platform are paid based on an undisclosed flat rate paid per read. To provide some context, as a featured author, Eleanor has more than 46,000 followers on Instagram, which is a common number among popular creators.

Writer, director, and developer.  Those are all the roles that a creator on Episode needs to fill. The storytelling aspect is the most prevalent in the app’s marketing, but it also encourages these young women to learn game development and design.

“You literally are directing a movie—you’re also the writer, the producer, and the editor at the same time. But I remember now the one thing that enticed me was the whole coding aspect, which was fascinating, and I got it relatively quickly,” said Rebecca, a 24-year-old in Pennsylvania who started making her own Episode stories three years ago. 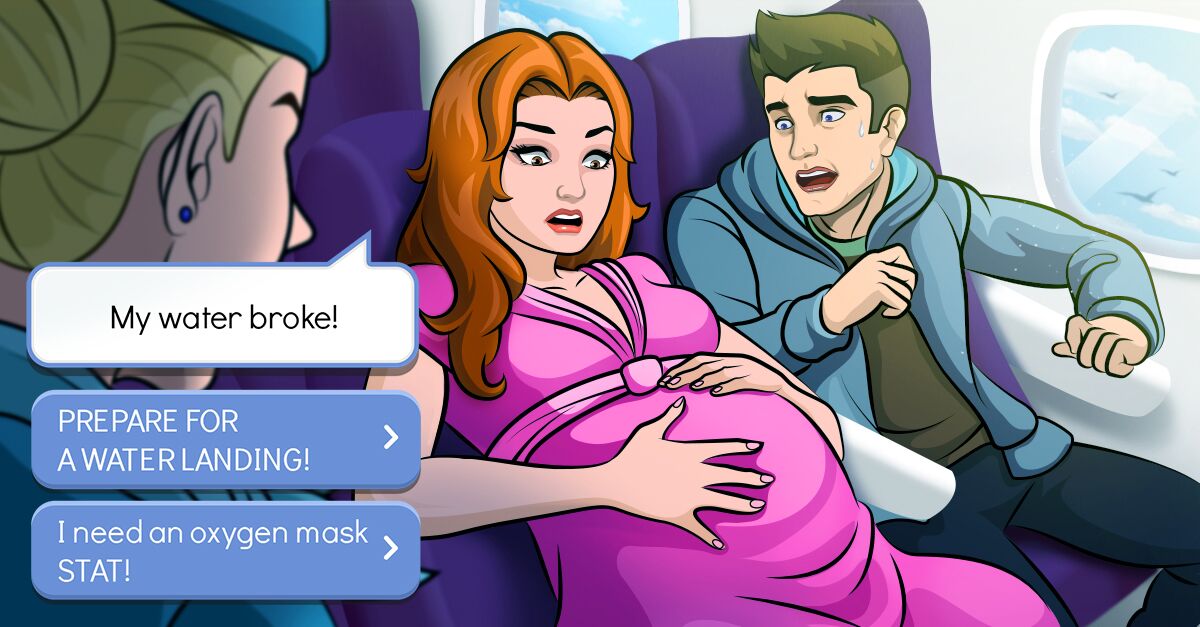 The one-woman marketing team. Getting featured as an author or winning a contest is a surefire way to get more people to read your content on Episode. But what else can Episode creators do to market themselves and their work?

While Episode doesn’t link out to other websites, creators will typically include their Instagram handle at the beginning and end of their stories to build their following. The social media platform is also how most authors engage with their fanbase, which has its ups and downs.

“In this online community, you’re interacting with readers, and there are a lot of people who are younger who don’t understand how long it takes to write an episode. And they’re like, ‘Why aren’t you publishing every day?’ Or ‘why can’t we customize your character?’ There’s definitely a lot of competition, too, and not everyone has the stamina or drive to keep doing this,” said Rebecca, who has about 9,000 followers on Instagram.

With Instagram as a platform for two-way communication between readers and creators, fans will often give feedback on the content itself. With tens of thousands of followers, Eleanor regularly gets these types of messages.

“I had somebody say they dread leaving my story because the love interest has broken up and thought I was biased toward the other love interest. But look, if you dread it, don’t read it. And I’m writing a romance and drama story—they’re not just going to kiss for 35 chapters,” said Eleanor.

Interactive entertainment also means the ability to be a creator. Episode’s active user base is primarily made up of young women ages 13 to 25. The app has taken off, along with Tik Tok and Twitch, because of Gen Z’s movement away from being passive consumers to active creators. More than half of Gen Z think the Internet is a more creative space than what they experience offline and use social apps to express themselves creatively, according to research from JWT Intelligence in partnership with Snap Inc.

Unlock this chapter: Episode, along with other apps like it, should change how marketers think of “gamers” and “game creators.” While these users and authors may not use those terms themselves, their actions and engagement with the app illustrate how mainstream and important interactive entertainment and user-generated content creation is becoming for all online communities.