Now’s a great time to start producing video content related to gaming. According to Nielsen company SuperData’s year-end 2020 report on the gaming industry, gaming video content generated over $9 billion in revenue in 2020.

At a glance, Facebook Gaming appears to attract less of a viewership than the other two aforementioned platforms. Streamlabs and Stream Hatchet’s latest quarterly report points out that Facebook Gaming only accounted for 10.9% of the total hours of streaming content watched across Q4 of 2020; Twitch and YouTube Gaming Live accounted for 65.8% and 23.3%, respectively. 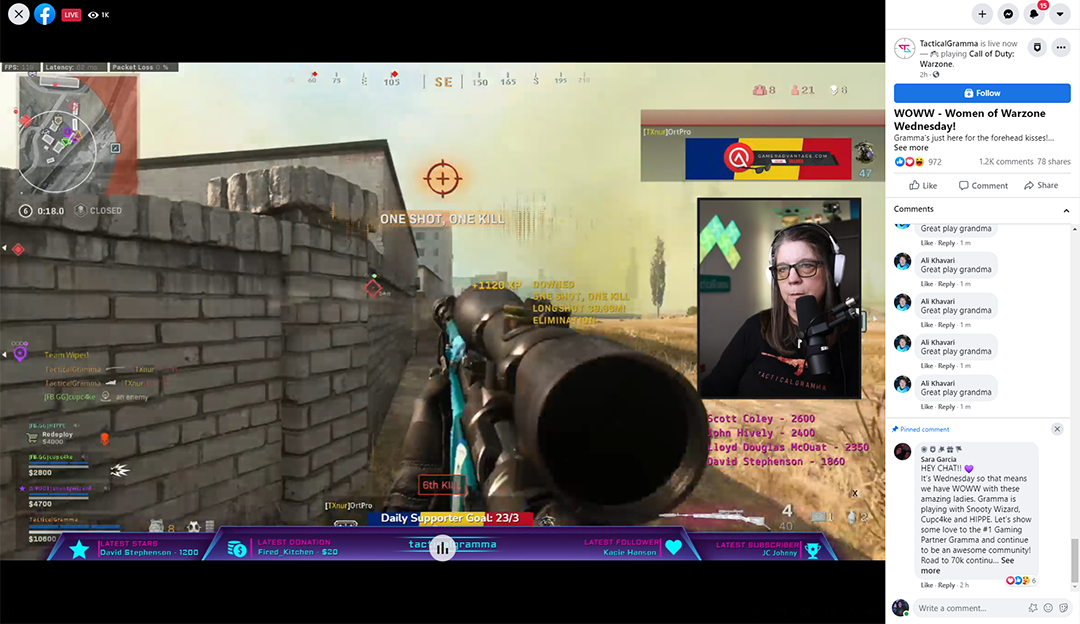 One of Facebook Gaming’s major benefits lies in its integration within Facebook’s wider array of social media services. Facebook Gaming streamers need only click a couple of buttons to start broadcasting their stream to their personal timelines or to public Facebook groups.

When taking into account Facebook’s massive audience — which, during Q4 of 2020, included over 2.8 billion monthly active users — this allows for a simple means of increasing a stream’s reach. Additionally, with a global penetration rate of 28.5% as of January of 2020, Facebook allows Facebook Gaming users to broadcast to reach audiences across the world.

By contrast, streamers who primarily stream to Twitch or YouTube Gaming would need to reach outside of the platform for promotion, which can be difficult if they don’t already have a following.  This is especially relevant if your brand has an extant Facebook strategy or maintains a significant presence and following on Facebook.

Facebook Gaming might be a more suitable platform depending on the kinds of audiences you’re targeting, especially if they’re specific to mobile gaming.

While Twitch’s front page is typically populated by PC and console games, for example, Facebook Gaming’s list of top-watched games often includes a higher amount of mobile games. At the time of writing, games like PUBG Mobile, Mobile Legends, and Call of Duty: Mobile regularly rank high in viewership on Facebook Gaming. This is likely due in part to how simple and efficient it is to broadcast mobile games through the Facebook Gaming app. The standalone app allows users to stream directly from their smartphones without much extra effort.

The events of 2020 had a palpable impact on the mobile gaming audience, which continues to grow. “The mobile market saw 10% growth in 2020 and accounted for 58% of the total games market,” the aforementioned SuperData report states. This audience is more casual, too; a January 2020 report from Facebook themselves observes that 49% of all mobile game downloads belong to a genre they define as “Hyper-Casual.” If this audience intersects with yours, Facebook Gaming could be a successful platform for your brand.

In October of 2020, several Twitch streamers were sent an email that unceremoniously announced that some of their content had been deleted after being subject to DMCA takedown notices for including copyrighted music. Twitch also encouraged streamers to pore over each and every one of their clips in search of other copyrighted material — or to simply delete their archives altogether.

This wasn’t the first time Twitch had been embroiled in a conflict with streamers and copyright holders, but it arguably had more of a lasting impact than any of the platform’s DMCA controversies. Some streamers were forced to review years’ worth of work in order to comply with Twitch’s standards.

Facebook Gaming, on the other hand, pre-empted such controversies by partnering with major record labels and publishers like Universal Music Group, Warner Music Group, and Sony Music Entertainment. In September of 2020, Facebook Gaming announced that their users could start playing copyrighted music in the background of their streams without fear of being issued a takedown notice.

Facebook Gaming has a few unique advantages over other platforms, though its primary strength lies in Facebook’s sizable, global reach. This makes it ideal for brands and businesses that already have a following on Facebook and can ensure that streams have an immediate audience. The large addressable market of casual gamers, as well as the high growth potential of the platform itself, makes for fertile ground to build your gaming presence.

If you’re still weighing your options between different gaming channels, check out our guide. If you’re still unsure of what platform to choose and require more guidance, shoot us a note.