An Inside Look at Escape Room Design

Every month or two, I try to invite an interesting guest into our office for a lunch and learn with our team. After our staff went to Stash House, a popular independent escape room in Los Angeles, for a team outing, we invited its creators to chat with us about escape room design and marketing.

Los Angeles-based filmmakers Don DeLeon and Tommy Honton met while working in entertainment and created Stash House out of frustration with the industry. From the minute you receive an email from the drug-dealer character “Ray,” your immersion begins. From there, Stash House takes you to a realistic Koreatown apartment for a ninety-minute experience that explores the dark underbelly of crime in Los Angeles and involves you deliriously flushing drugs down the toilet at the end of it.

If you’re unfamiliar with this experience, let me break it down for you: “Escape the room” games originated in Japan and have since become a global craze. In 2014, there were 22 escape room companies in the United States, but that number has grown to 2,000 since then, according to The New York Times. Wherever you are in the world, the premise of escape rooms is pretty consistents: people are usually given an hour to interpret clues, solve puzzles, and discover hidden objects to get out.

Tommy Honton: Don and I were talking about putting Stash House in an apartment. Like, could we put this in a real apartment? Creating a real feeling, because that’s one of the big things that always drove me nuts—was these things felt like laser tag or mini-golf. You go somewhere and there’d be a lobby and some employee who didn’t really care and would give you some half-ass story about where you’re going in. You’d walk in the room, then leave and take a picture in the lobby. And to me, it was very hollow, like they were missing stuff. So, I loved the idea of making a space diegetic, meaning that the space is narratively tied to the story and your reason for being there.

Coming up with a story

Don DeLeon: A friend responded to a tweet recently that I read with a list of five songs that you think are very cinematic. One for me was a song called “Five Minutes to Flush” by a group called The Firm and was super visual. It’s about a guy, two o’clock in the morning, the police are knocking at his door, and he’s starting to think that his girlfriend betrayed him. They’re throwing coke in the oven, flushing weed down the toilet, and I could see it as that song as playing out. That always kind of stuck with me, and that was the nugget of the idea, and then we just expanded on that. 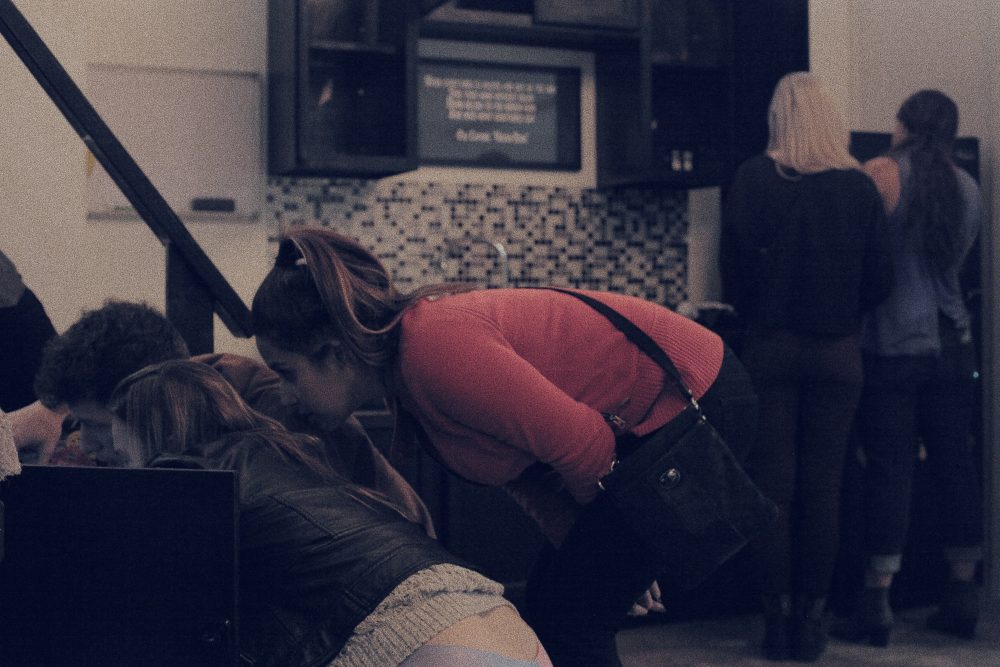 Honton: Our very first test group played only 15 percent of our game. We wanted bodies just to go around the room and see where they went and what they did. Don and I sat in the corner and told them we’d be sitting there, and we knew that would mess up their game for a little bit. Eventually, we’d go to cameras, but first, we wanted to be in the room to actually watch and hear them immediately. What’s interesting is they forgot about us after a little bit and we saw where people were willing to go and do and what they weren’t.

Feedback is a big thing in design, too. I love iterating and getting something on its feet, maybe wobbly, but as early as possible, because then you can tear it down and build again. We want to get people in early to see how they experienced the space, what areas drew their interest. Some areas were too dark, so we started lighting areas to make it easier for them to see and go to, or we’d move this here and adjust it this way.

People also are terrible at explaining why they do what they do. Feedback is usually only 10 percent of the actual picture, while the rest is their behavior. The players’ responses need to be combined with activity tracking and heat mapping to give you a complete picture. People have the sense that we’re the drivers of our own destiny, but we’re not. We’ll do something then we rationalize why we did it.

Standing out from other escape rooms

DeLeon: I think what separates us from the others, especially in the tourist market, is that we built the quintessential L.A. escape room. It’s an L.A. theme of ‘90s hip-hop. It’s very specific in time—Raiders, Lakers—and deals with the drug culture. I think it’s a little bit more provocative than the next one.

So, when people are reading down the list of all the escape room names and come across “Stash House,” they’re like, “Wait, what?” They want to know what it’s about: What if you’re trapped in a drug dealer’s apartment and you have to find all the cocaine and flush it down the toilet before the cops come?

DeLeon: One of our other goals is to try and reach a market that’s been untapped. So, we don’t run any more ads, but when we did, we would target on like Facebook and Instagram, all the groups who are not necessarily the escape room demographic. We market more to the Coachella audience, the younger kids that don’t know exactly what this is or think it might be geeky until they read about it. Then they’re like, “Oh, maybe we should check this out.”