How to Get Better At Video Games

Famous streamer Tyler “Ninja” Blevins just released his Ninja: Get Good, a book touting itself as the ultimate guide to playing and winning just about any video game. Get Good is filled with useful tips, illustrations, and anecdotes that Ninja’s 45 million followers across his platforms will likely enjoy. But if you don’t have the desire to read his book, you can read our interview with someone who also has a lot of insight into how to get better at playing video games: Ronald Ly, Head Coach of UCI Esports Overwatch teams. He speaks to us about how to improve your skills, whether you want to go pro or just improve your gameplay.

Twofivesix: How would you describe your overall approach as an esports coach?

Ronald Ly: A lot of coaches do things differently. I try to have a healthy balance between life coaching and more strategic coaching. I’m responsible for making sure that there is a positive team atmosphere and keep them motivated and positive. Making sure that they’re media trained and careful with the words — always sportsmanlike. So, I work on things ranging from player management to planning out events to more of a managerial role than traditional sports coaches.

I think in traditional sports, most of those coaches have their hands full of just working with the game and making sure their team is in good physical shape. Whereas we do that, but also have to make sure that our players see themselves holistically and detach their self worth from just the victory or defeat screen at the end of the day, on top of making sure our strategy and tactics are up to a point that people are well drilled and practiced.

Twofivesix: It sounds like you’re taking into consideration several skills, but are there certain skills that you are focusing on more than others?

Ly: A lot of popular esports are teamwork-oriented, mirroring the way we look at traditional sports like baseball, basketball, or football. And I think a lot of gamers who are aspiring to be pro gamers spend a lot of time alone focusing on their own craft, but they try to join an organization or get scouted but haven’t worked on interpersonal skills.

They don’t have the social skills or the relationship abilities to elevate their play above a surface level. So what we recommend really heavily is to make sure that you are rounding out your skill set in terms of other intangibles outside of the game. So, we have a lot of guys that have great hand-eye coordination, but other people can articulate their feelings or their intentions really well and get along with others. They raise others up and have great leadership qualities. These are the things I look for when I’m personally trying to find out who I want on my team rather than just the person with a slightly higher rank.

Twofivesix: How much do players practice, and how do you determine that?

Ly: The level of practice varies from team to team but at a collegiate level, we practice four times a week. That includes one break day for them and one half day as well. We’ll have one scrimmage which is usually a two-hour block, followed by review and a debrief where we talk about the issues that day. What went well? Did we hit our set goals for that day? We sometimes do pre-meetings as well where we talk about new strategies we might want to employ or discuss upcoming opponents. Generally, over the course of a week, we spend roughly 30 hours either talking about the game or playing the game.

But if it’s a very busy week for my students—if they have finals or big assignments—we might drop a block, because we don’t want to overly stress our players and want them to maintain a healthy balance.

Twofivesix: Do they typically practice solo or with each other?

Ly: We highly encourage them to play in groups of two if not more on their own time, which they do very frequently. And outside of paired up practice, they do scrimmages that involve the six match starters as well as the substitute spectating, learning, and asking questions. 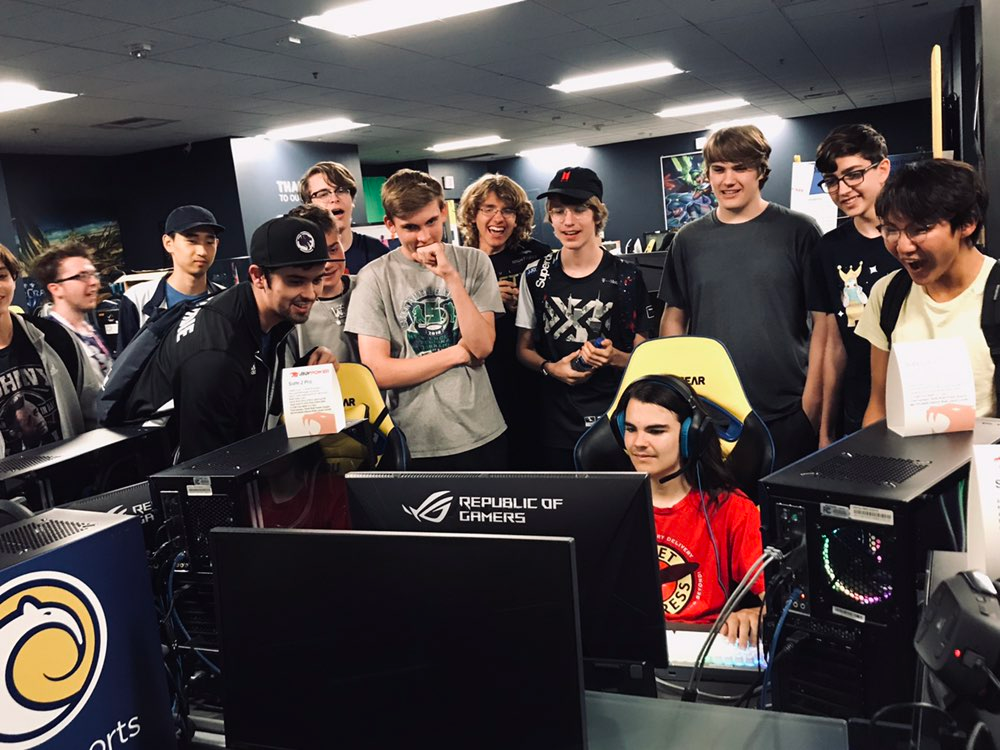 Twofivesix: Do you have any advice that could apply to gamers who want to get better but don’t necessarily want to go pro?

Ly: I think first and foremost, a lot of people who play games do it for the fun of it. For those who are competitive, part of what brings them joy is winning in a competitive environment. It’s really important for players who are looking to improve to disassociate your worth as a person with whether or not you’ve won or lost. Again, I think it can be very toxic and detrimental to not only a person’s improvement but their mental health if they get slipped up or have a bad streak.

So, I would make sure that you have breaks from the game, so it doesn’t consume your entire life — have the ability to separate your competitive outlet from your outlet for fun. So, I have other video games I play with my friends that I’m not as competitive in, like League of Legends and Apex Legends, and my focus is just to enjoy the company of those around me, and not to worry so much about if I’m winning or losing. Even when I play Overwatch, I buckle down and really try hard to focus on improving regardless if I win or lose.

Twofivesix: For someone who does want to get better, would you recommend a certain number of hours to practice each day or each week?

It doesn’t have to be extremely rigorous. An hour or two a day is totally enough to improve your play. What matters the most is that you’re intently focused and goal-oriented for those couple of hours that you play. Make sure to review and reflect on those hours. And that’s more important than just the raw quantity of practice.

If you play eight hours straight but don’t reflect at all, then everything you’ve learned is going to go in one ear and out the other. Whereas if you play for two hours then look at that footage again for maybe another half an hour, you can point out, Oh, I could have done this better, or I didn’t consider this at the time I was playing, but I’ll remember that for next time. And it’ll gradually become second nature to you.

Twofivesix: In the training for your teams, do you watch Twitch or YouTube at all?

Ly: The answer to that question is a resounding yes. We watch a lot of pro footage together. If my players cannot watch the games, me and my assistant coach are always watching to see if there’s anything interesting to pull from a professional game. We’ll break it down and talk about it to see if there are ways to execute similarly or avoid the same error that they did. We use YouTube and Twitch a lot—almost daily.

Twofivesix: In Ninja’s new book Get Good, he discusses hardware and software, and I was curious how much do you think hardware and/or software contribute to becoming a better gamer?

I think that’s a very interesting question. I am of the opinion that it definitely makes a difference. But I don’t think having a better set up will automatically make you a pro. But it will give you an edge and just how sizable the edge is will vary from the people you ask and how high end are we talking. A person that is limited to seeing a game at 60 frames per second versus someone that’s seeing the game at 144 frames per second is quite large. I personally use very low-end equipment. I had no technical keyboard or gaming mouse or good monitors until fairly recently. I competed on a lower-end rig and was able to perform well, so there are slight disadvantages, but nothing that you can’t overcome.

The thing that will make you better than others at the end of the day is practice. I have friends who are extremely good at the [Overwatch] game that played with office mice and laptops that are half falling apart. I know a lot of guys who are from other parts of the world and who aren’t in positions where they have cheap and good gear available or they have a lot of latency. But they can make it work. At the end of the day…it’s hard work and dedication that really hones your craft and gets you to the next level in the same way that it would in traditional sports.