Who comes to mind when you imagine a gaming content creator? When streamers and YouTubers grace the headlines of major publications like The New York Times, The Washington Post, or WIRED, they tend to be English-speaking creators like Ninja, Pewdiepie, and Pokimane.

But the truth is that a significant amount of top-performing gaming content creators don’t speak English as a first language. You might not have heard of Nobru, Arigameplays, or ibai before, but they happen to be some of the most-watched content creators in the world — and none of them use English as their primary language.

Learning these names is key to understanding how international gaming markets might differ from the US, which is especially important if your brand’s target audience includes demographics located in non-English-speaking regions. 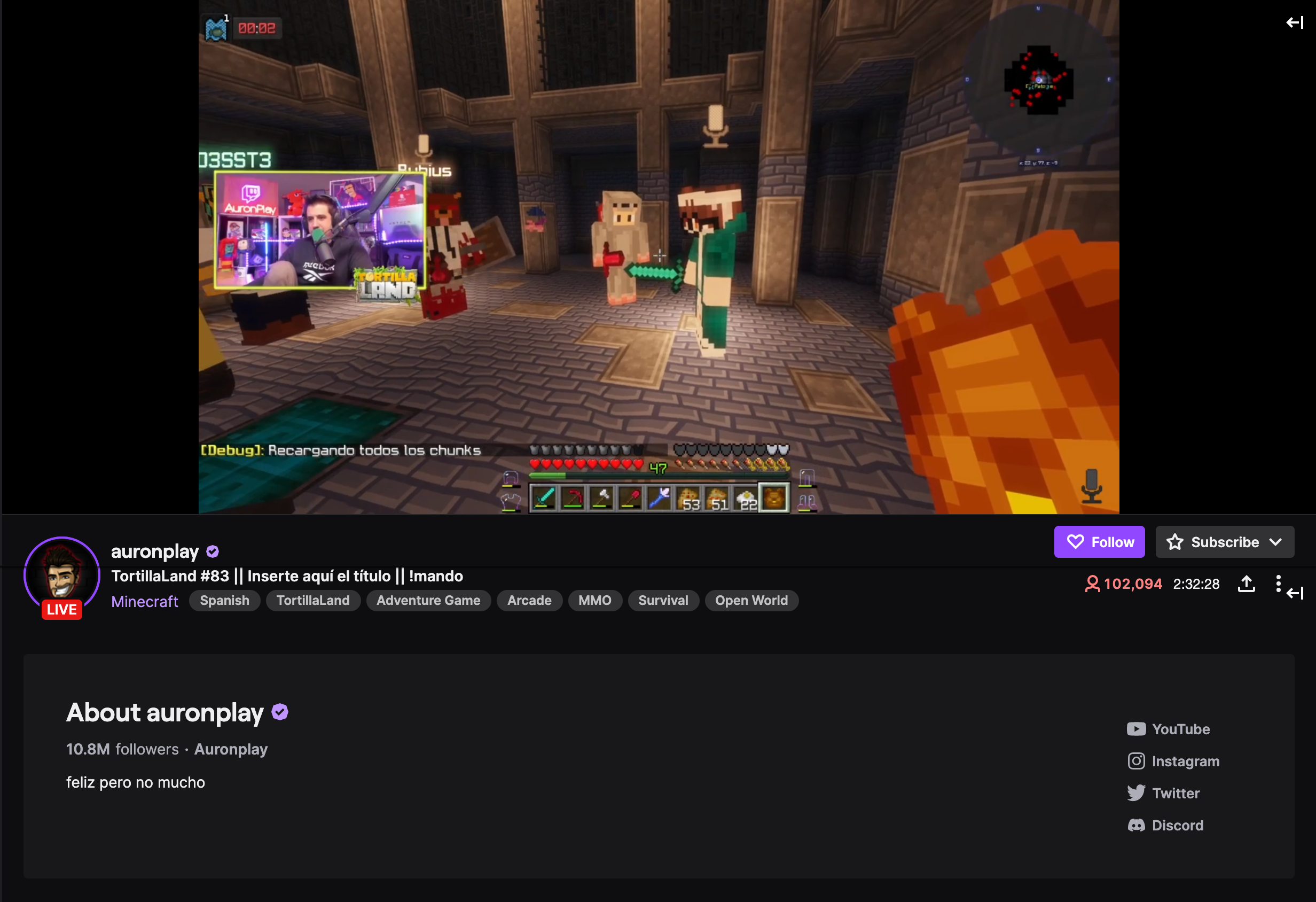 Reach beyond the US

Luckily, it doesn’t take much poking around to find evidence that non-English-speaking creators make up a sizable portion of the gaming content landscape.

According to Statista, three out of ten of the most popular YouTube gaming channels are non-English-speaking (as of September of 2021). Though Pewdiepie remains far and away the most-subscribed channel with over 110 million subscribers, Spanish YouTuber Vegeta777 is the second most-subscribed with over 32.6 million. Meanwhile, Spanish YouTuber Mikecrack comes in at fifth, while Venezuelan YouTuber TheDonato places tenth on the list.

When comparing the social metrics of different content creators, it’s also important to take a look at the creators who’ve seen recent booms in popularity. Throughout September 2021, for example, TwitchMetrics reported that seven out of ten of the fastest growing Twitch channels were Spanish-speaking. These channels included ibai and Auronplay, both of whom hail from Spain, as well as juansguarnizo, who’s based in Colombia.

Now that you know they’re out there, though, how do you go about choosing the right person for a collaboration or brand activation? 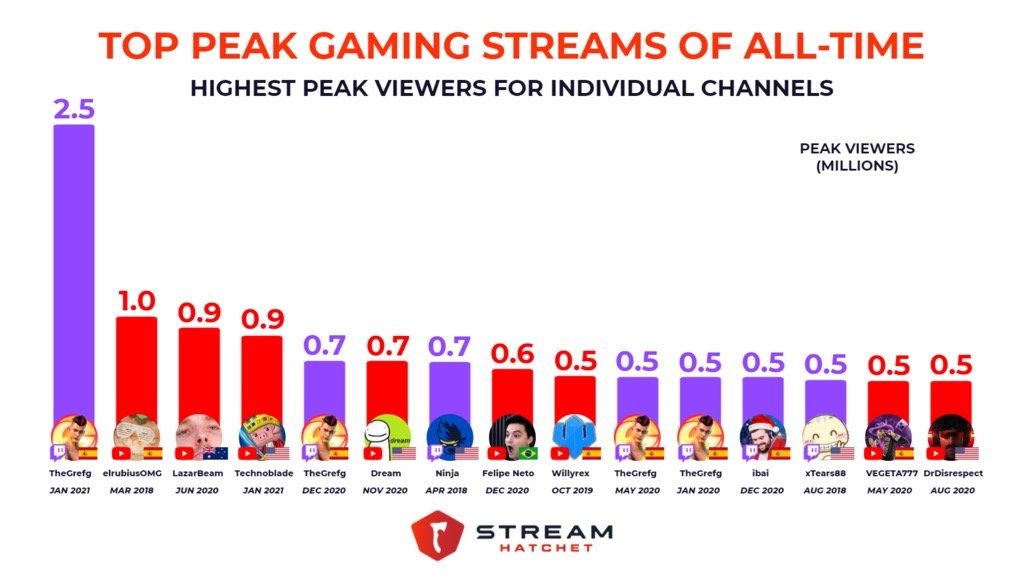 The data speaks for itself. Even if your goal is simply to cast as wide a net as possible, a glance at the numbers will reveal that English-speaking streamers can only get you so far.

Spanish-speaking streamers in particular have started to take up more and more space on platforms like Twitch and YouTube. Take this infographic, for example. At the beginning of 2021, esports analyst Rod “Slasher” Breslau worked with Stream Hatchet to produce a list of the top 15 gaming streams of all time (measured in peak amount of concurrent viewers).

More than half of the streamers listed are Spanish-speaking. Most notably, TheGrefg’s Fortnite stream on January 11th, 2021 peaked at over 2.4 million concurrent viewers, completely obliterating previous Twitch records set by the likes of Ninja and Alexandria Ocasio-Cortez.

To further illustrate just how massive Twitch’s Spanish-speaking audience is, let’s look at the viewership metrics behind 2020’s series of Twitch Rivals Among Us tournaments, which were categorized by region. According to Esports Charts, both North American Twitch Rivals events failed to surpass 60k viewers each. The Spanish event, on the other hand, roped in over 300k viewers at its peak, largely due to the participation of popular Spanish streamers like Auronplay.

What’s happening here, exactly? Well, for starters, Spanish is the second most-spoken language in the world (when tallied by native speakers), possessing over 100 million more native speakers than English.

With over 3.5 million followers on Twitch, Nobru is one of the top 50 most-followed streamers on the platform. You won’t catch him playing Fortnite, Minecraft, or League of Legends, however; his game of choice is Garena Free Fire, also known as Free Fire.

If you live in the US, you’d be forgiven for never having heard of this game before. It’s a free-to-play, third-person battle royale game — much like Fortnite but exclusive to mobile platforms.

It also boasts a massive audience. In Q2 of 2020, Free Fire reached a peak of roughly 100 million daily active users. Just one year later, during Q2 of 2021, the game racked up a peak of 150 million daily active users. Moreover, Free Fire even beat the mobile version of PlayerUnknown’s Battlegrounds (better known as PUBG Mobile) in total earnings across Q1 of 2021 in the US.

Garena Free Fire’s relative anonymity in the U.S. is due to the fact that most of its audience is international. A report by SEA Limited, the parent company of Free Fire publisher Garena, stated that the game was the highest-grossing mobile title in Latin America, Southeast Asia, and India across Q1 of 2021.

To get an even more comprehensive sense of Free Fire’s international popularity, we can also take a look at the esports teams that have earned the most from competitive Free Fire play. At the time of writing, the countries that have garnered the most Free Fire esports winnings include Thailand, Indonesia, Vietnam, Russia, India — and Brazil, where Nobru resides (and where mobile games like Free Fire make up 47% of the market).

In short: Look for more Free Fires and you might find more Nobrus. Understanding what’s popular on an international scale will help you find streamers with large audiences potentially untapped by US-focused campaigns.

Other than tracking Twitch and YouTube statistics, one of the easiest ways to find popular international streamers is simply to watch out for tournaments and special events.

Take “Arkadia,” for instance, which is a private ARK: Survival Evolved server that’s exclusive to Spanish content creators. This list of participating members is a good starting point for finding Spanish-speaking streamers to follow.

Otherwise, finding up-and-comers can be a difficult and less-than-scientific process. Luckily, staying on top of gaming culture from a global perspective is a part of our job. Let us know if you’d like more of our advice.