How NOT to Market Your Brand on Twitch

When marketing to the gaming audience, one of the most frightening things you could ever see as a comment on one of your social media posts is the image of Steve Buscemi donning a backward baseball cap, a skateboard slung awkwardly over one of his shoulders.

Over the past few years, this “how do you do, fellow kids?” meme — a screencap from an episode of 30 Rock — has become a handy tool for calling out actions that appear inauthentic or out-of-touch. But it’s also emblematic of an atmosphere of scrutiny that has come to pervade any branded post. As younger generations become more and more social media-savvy, so too do they grow warier and warier of brands trying to use their own idioms to reach them.

This is especially true of Twitch’s user base, an audience that can mobilize against a stream in an instant.

On the one hand, now is as promising a time as ever to reach an audience on Twitch. Industry reports indicate that Twitch users watched a total of 3.1 billion hours’ worth of content over the course of Q1 2020, an increase of 17% over the previous quarter. As COVID has driven people indoors, more folks are willing to spend some of their quarantine hours watching Twitch content.

However, winning the approval of Twitch viewers isn’t easy. Even a simple, honest mistake can be enough to turn Twitch chat against you. The subreddit r/LivestreamFail is dedicated to immortalizing any blunders that occur on the platform, whether they were performed by individual streamers or by brands. This is an audience that can be skeptical of outsiders, resistant to inauthenticity, and easily capable of organizing trolling campaigns.

Below, we’ll take a look at examples of mistakes and controversies that have taught us valuable lessons in how to approach and communicate with this audience.

Make sure you’re brushed up on Twitch’s vocabulary

As a brand, daring to interact with Twitch’s users requires a fluent and dynamic understanding of the Twitch chat lexicon, particularly its vast glossary of emotes (Twitch-specific emoticons).

Given the rapid pace of Twitch chat during particularly popular streams, it’s common for users to spam an emote to communicate a general feeling or idea in lieu of using text. Simply put, emotes don’t have fixed meanings; they signify different things depending on context and history of usage.

KFC learned this the hard way in March of 2018. The restaurant chain was co-sponsoring a Twitch tournament of PlayerUnknown’s Battlegrounds, a first-person shooter battle royale that had just emerged as one of Twitch’s most-spectated titles, and had devised a promotion to allow participating viewers to earn a KFC gift card.

Securing first place in a match of PUBG — a difficult feat in a game that can host as many as 100 competing players at once — results in on-screen text depicting the phrase “Winner Winner Chicken Dinner!” To synergize their promotion with the content of the tournament, KFC designed a pixelated bucket of fried chicken for use as a Twitch emote.

KFC’s original intent was for viewers to use the emote when a player won a match of PUBG, subsequently opting in to the chance to win a gift card. When the emote went live, however, users started pairing the emote with the “Tri-Hard” emote, which depicts black streamer TriHex smiling with his mouth agape.

The emote has been long associated with racism on the platform, especially when deployed while a black person is on-screen. KFC couldn’t necessarily have predicted that Twitch viewers would have found a way to use their custom emote to proliferate racist stereotypes. However, they could have performed an audit of Twitch’s library of emotes and determined whether or not their emotes could be imbued with any unwanted double-meanings. 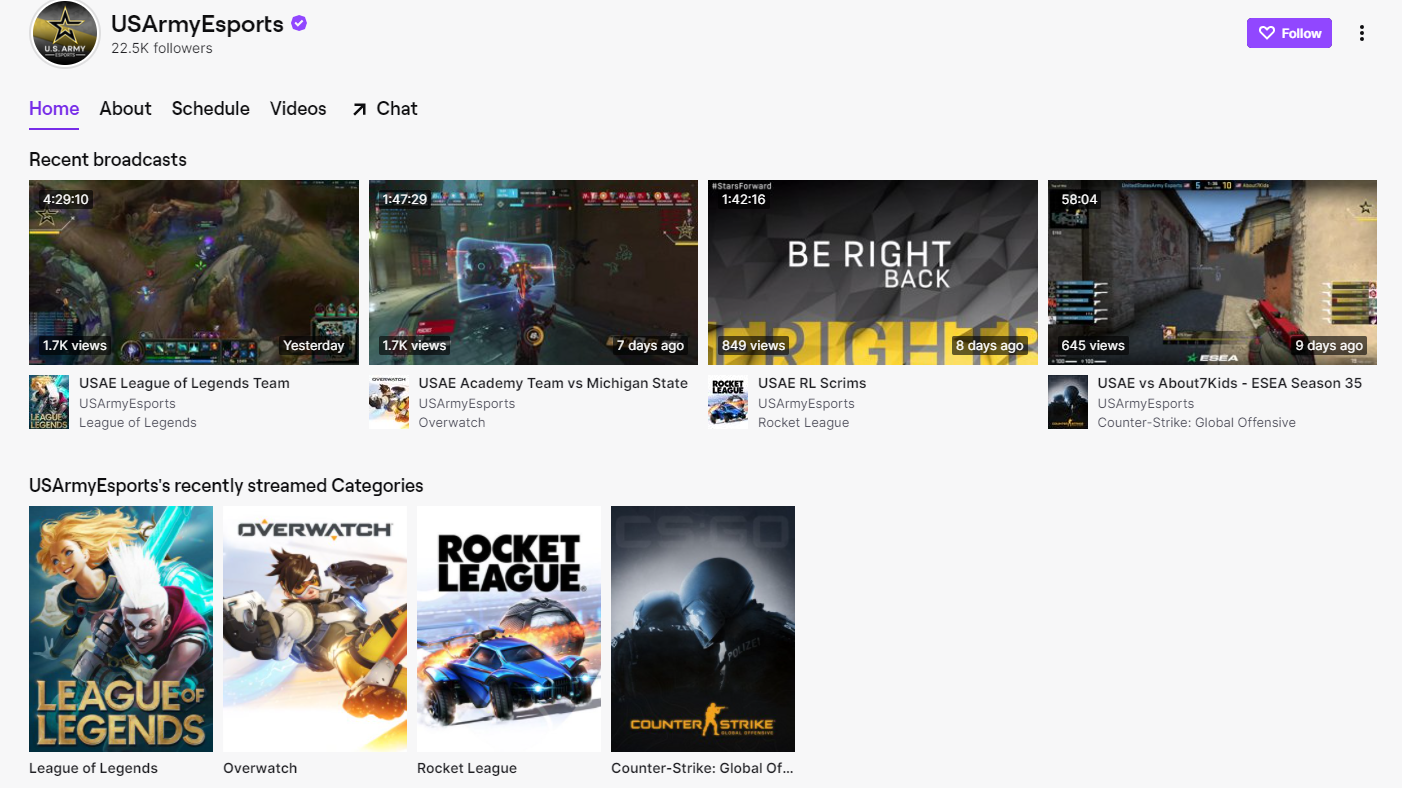 The real-time nature of Twitch and its chat function make it incredibly difficult to pre-empt trolling or negativity, even in the presence of diligent moderators. As a result, it can be a struggle to steer the flow of conversation, especially once an audience has made up their minds about how they feel towards what they’re witnessing on the platform.

The US Army experienced this first-hand. Back in July, House Rep. Alexandria Ocasio-Cortez introduced a bill to Congress that would prevent the US Army from using Twitch as a platform for recruitment. The effort represented a culmination of controversial events that had occurred across the army’s official Twitch channel and Discord server in the weeks prior.

It all started when the official Twitter account for the US Army’s esports team entered a playful back-and-forth with the official Discord account, ultimately replying to a tweet with a simple “UwU” (an emoticon meant to look like a face making a cute, coy expression).

Finding the tweet patronizing and inauthentic — especially coming from an official military account — many users flocked to the US Army’s Discord server to see who could get banned the fastest simply by posting evidence of US Army-committed war crimes. Another group of users applied the same trolling strategies to the Army’s Twitch streams.

After getting banned from the Army’s Twitch chat for posting about US war crimes, a writer for The Nation discovered that the Army had been directing their viewers to a recruitment page by advertising a fake Xbox controller giveaway to them. Following this revelation, negative attention began to swell around the Army’s Twitch channel as people argued that the Army had violated Twitch’s terms of service by using false and coercive advertising.

Ultimately, Rep. Ocasio-Cortez’s bill failed to pass the House vote, but the Army independently decided to halt their activity on Twitch to curtail the public backlash. The Army learned the hard way that it’s easy for Twitch users to mobilize against any streams that become the target of their ire. They respond poorly to anything that they interpret as attempts to manipulate their opinion, and it’s difficult for any brand to retain credibility after acting in ways that users deem inauthentic or tone-deaf.

Not all major influencers are compatible with every audience

Though it might be tempting to employ an influencer with a massive following for a Twitch event or campaign, an incompatible audience might create friction and ultimately cause the effort to backfire.

For example, in 2018, at the end of the Overwatch League’s very first season, the League announced that they would be hosting the Finals at the Barclays Center in Brooklyn, NY. For context, all other prior Overwatch League events had been hosted at a much smaller venue in Burbank, CA. Not only would this be the League’s first event on the East Coast, but it would be the first time the League would have to justify booking an arena with a capacity of nearly 19,000.

To provide entertainment to spectators ahead of the competition, the Overwatch League booked DJ Khaled for a performance that would be streamed exclusively on Twitch. Though the idea of hiring a platinum-certified artist to open a live event might have seemed innocent and safe enough, DJ Khaled’s performance was poorly received by his audience both online and in-person.

As soon as DJ Khaled hit the stage, the chat section of the League’s official stream became replete with comments mocking how out-of-place and awkward his appearance was. User-generated clips highlighting especially cringy segments from the performance have since received hundreds of thousands of views.

These segments include a clip of the audience struggling to reach a consensus on how to sing along to one of his songs as well as a clip of a child looking unimpressed by DJ Khaled’s footwork. One intrepid viewer even made a meme of DJ Khaled dancing set to music from Fortnite.

A major danger of hosting any event on Twitch is that viewers have the ability to excerpt public broadcasts, effectively allowing any viewer to easily capture and share any moment that goes poorly across social media. Furthermore, the real-time nature of Twitch chat can have a palpable influence on how viewers receive what they’re seeing on-screen. As soon as a negative sentiment reaches a critical mass, it has the potential to overtake the entire chat.

It isn’t impossible, however, to find ways of naturally integrating artists and influencers outside of gaming into esports events. For example, the 2018 Fortnite Celebrity Pro-Am paired the likes of artists like Marshmello, Ty Dolla $ign, and Fall Out Boy’s Pete Wentz with professional Fortnite streamers in a competition for charity. Unlike DJ Khaled’s Overwatch League appearance, this event made a novelty out of the fact that many of these personalities had little to do with gaming, making it more difficult to fault any single artist for seeming out of place.

There aren’t any hard and fast rules for approaching audiences on Twitch. Twitch’s colloquialisms shift over time and any single event might change the audience’s opinion, imbue an emote with a new meaning, or write itself into the platform’s history.

The only real way to stay abreast of Twitch’s conventions is to follow happenings on the platform closely and regularly — a practice to which we’ve committed our consultancy. We monitor current conversations (and controversies) surrounding the platform to extract meaningful insights about the Twitch audience. That way, we can provide our clients with confident guidance about how to interact with the platform to meet their own goals.

Want help getting your next campaign on Twitch — the right way? Get in touch.